I’ve been telling Paul Zervas & Kath Pepper to play Acapela Studios for years. I could see the marriage of their glorious acoustic harmonies with the sonic possibilities of The Chapel would delight an Acapela crowd so it was with huge pleasure that I got to see this realised.

Paul & Kath were joined by their usual guitarist Simon Kingman on electric guitar and Charlie Piercy on Keyboard and electric guitar. And of course, the two Cigar Store Indians on silent backing vocals and intensive staring. The duo are currently riding high on the release of their latest album, Endless Road, Restless Nomad. So we were treated to a plethora of new material and some Sure Fire Hits from the Z&P Catalogue. It was more or less a hometown gig for the band and the crowd were certainly up for a good time.

They kicked off with 4 songs from the new album which established the form of the show (and albums for that matter) where Paul and then Kath take on lead vocal duties on each song.

So we get Cards, Sad Pariah, Endless Road and Restless Nomad.

For the full review visit the excellent Meetwood Flac blog.

Closed in August for refurbishments

The venue is closed in August for some exciting refurbishments designed to make your visits even more enjoyable!!!

See you in September when we have a very busy and exciting line up to finish off 2019 – get your tickets quick before they go.

Not the Rolling Stones concert review

Not The Rolling Stones came to the Acapela Studios with the reputation of being THE best Rolling Stones tribute acts in the UK. And they certainly lived up to their billing tonight.
With Mike Jagger they have a front man who is SO like his namesake it is frightening at times. He, and ‘Keith’ have certainly done their homework and have the individual mannerisms of The Glimmer Twins down to a T. 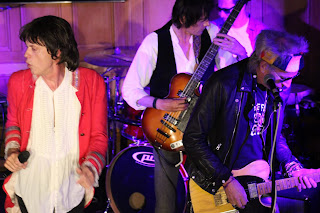 The big question on the night was what songs they would pull out of the impressive canon of songs that belong to The Rolling Stones.
And you know you’re onto a winner when your first song of the evening has the crowd on their feet immediately and singing along from note one. As the first chord crashed from ‘Keith’s Telecaster we knew we were in for a great evening. And the first song? ……Jumpin’ Jack Flash.
Acapela was Sold-Out, it was bouncing from song one and it was like an oven in there. It must have been very much like those early Stones gigs but the band tonight had over 50 years of songs to chose from.The next song lifted the roof even higher as the band launched into another uptempo toe tapper guaranteed to get the audience dancing….Let’s Spend The Night Together.
Check out the band playing Can’t get no Satisfaction – click here
………..Tonight was one of the best nights I’ve ever had at Acapela. And it came at just the right time for me. A gift from God. And those 6 people up on that stage who gave everything they had tonight. I think they might have been surprised at how well they were received. The Acapela is probably not their normal type of venue. It just goes to show that no matter what type of venue bands play at – although the Acapela happens to be quite brilliant – it’s the relationship between band and audience that matters. And tonight at The Chapel they were both literally singing from the same hymn sheet. If they come back. I’m there!!
For the full review visit the Macwood Fleet blog.

The intimate setting of the Acapela club brings artistes and audience together, and an evening with Tom Robinson is like spending time with an old friend. Robinson is an all-round nice bloke and as down to earth as his lyrics suggest. He’s funny, too, and joked about incidents in his career and his own confused sexuality, often stopping mid-song to tell a story.

Lee Forsyth Griffiths, a self-proclaimed yob with a melodic voice, opened with a few tunes of his own and accompanied Robinson for the second half of the show. There were songs about unrequited love and male suicide – with a heartfelt plea to spread the word that help is available – and songs about the state of the nation. But it wasn’t all doom and gloom: the tongue-in-cheek Grey Cortina was there, as was Martin, played on the keyboard, and the song that nearly ruined his career but became an anthem, Glad To Be Gay, and the audience sang along with vigour.

I’ve seen some excellent shows over the last few years at Acapela Studios. But the one I was privileged to attend on Saturday 11th May was one of THE Best Gigs I have ever seen there.
The musicians who were performing were The Luke Jackson Trio – who consist of Luke Jackson on Vocals and acoustic guitar, Andy Sharps on Bass & Vocals and Elliott Norris on Drums, Guitar & Vocals.
I have seen Luke at least once a year since he released his first album to critical acclaim in 2012 with the Martyn Joseph produced More Than Boys. In 2013, Luke was pipped to the post of the BBC Folk Horizon Award by fellow Singer/Songwriting youngster Blair Dunlop. And it has been my delight to see how both of these artists have grown both as songwriters and performers in the past 7 years. Tonight the Acapela belonged to Luke Jackson. And by God, he owned the venue!
Luke has the opportunity to play with Andy as a Duo or with Elliott added to create a trio. Tonight we are treated to the Trio performance.
Tonight Luke takes to the stage alone to perform a blistering version of Ain’t No Trouble which can be found on his trio album – This Family Tree. And he blows the audience away immediately. It’s remarkable how the strength and depth of his voice has increased in just the last year. Let alone since 2012.
You could literally feel the anticipation in the air as the audience realised what an evening they were in for. To rapturous applause, Andy and Elliott came to the stage and launched into a splendid version of Anything But Fate which morphs into the Motown classic, I heard It Through The Grapevine. Quite a leap I hear you Folk fans saying but not for this young man. Ever since his debut album, that voice has been his trademark and I hear as much Soul in hos voice as Folk. And thinking about it, one of the beauties of following both Luke and Blair Dunlop’s careers has been to see them shake off their Folk roots to become impressive Singer Songwriters who have the ability to move between genres. It’s a beautiful thing to see. And for me, Luke is now a Soul singer as much anything else.
To read the full review visit Nick Baker’s blog – Macwood Fleet